Tractor & Construction Plant Wiki
Register
Don't have an account?
Sign In
Advertisement
in: Pages with content from Graces Guide, Marine engine manufacturers, Engine manufacturers of the United Kingdom,
and 6 more

The Ailsa Craig Motor Co Ltd was founded in Glasgow in 1891 and named after a landmark offshore rock on the western Scottish coastline near to Ayr. Later they were based in Chiswick, London, W4, England. They held the Royal Warrant as suppliers of Marine Motors to King George V.

The company was among the first in the UK to build hot-bulb diesel engines, although they dropped them fairly quickly with the advent of direct injection and the start of WW1, when they were required to produce goods for the war effort.

They continued with smaller engines up to the 1960's, but eventually closed down by 1972.

Ailsa Craig Engines was a manufacturer of marine and specialist made to order engines from 1891 to 1972. Named after the island Ailsa Craig, the company began as a bicycle manufacturer in Glasgow in 1891, later moving to Putney, in London where the then owner went into partnership and set about building early vehicles, going on to produce the world's first V12 engine and even a petrol engined vacuum cleaner for Hubert Cecil Booth in 1904. 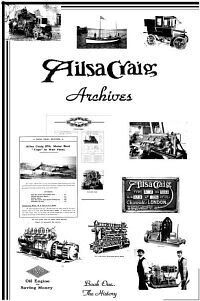 A little later, Ellis Kisch took over and the company moved to 46/47 Strand-on-the Green, Chiswick in West London. There was a concentration on reliable marine engineering with a Royal Appointment being granted in 1926. Following successful work for the Ministry of Munitions and Admiralty during the First World War there was a massive war commitment in 1939 when 5000 engines were to be supplied from an additional factory site in Twickenham. Harold Linford who was the Chief Designer and General Manager was killed when an aerial bomb exploded over the Factory at Strand-on-the-Green in 1941. John Watson took over the running of the factory until the move to Ashford in 1949/1950 and there produced further quality diesel engines, with the help of Ricardo Engineering, under the direction of Robert Kisch — son of Ellis between 1958 and 1963/4 when he was taken ill and moved ultimately to Jersey. This ultimately resulted in the company being sold to the Warsop's Fram Group in 1964.[1]

In 1972 Ailsa Craig ceased trading, although Dr Kisch and his son Christopher Kisch continue to offer advice where appropriate.[2]

Examples of there engines can be found in several Museums in the UK, and in some Vintage cars;

add any other relevant links here