AMZ Kutno Ltd is based in Kutno, Poland, and has been operating since 1999. It specializes in the design and manufacture of special bodies for commercial vehicles: ambulances, valuables transport, mini-buses, special vehicles for the police, as well as military vehicles.

Mini bus chassis have been produced since 2001. Mini-buses use chassis from: Ford, Iveco, Mercedes-Benz, Opel, Renault, and Volkswagen. Initially, only conversions were performed on buses. Over time, AMZ-KUTNO started to produce buses with their own, original construction on van or truck chassis . 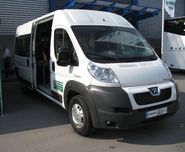 For main vehicles produced by AMZ-Kutno are armoured cars:

The Boar is produced in three versions for Polish uniformed services and export to Iraq. By February 2008 there were more than 600 units sold. In 2007 it joined the Tur I model in production, while in the 2008 model year they introduced the Zubr and Tur II models.

AMZ Dzik 2 of the Polish Army Military Police at Kielcach