Škoda Auto, more commonly known as Škoda, is an automobile manufacturer based in the Czech Republic. Škoda became a wholly owned subsidiary of the Volkswagen Group in 2000,[2] positioned as the entry brand to the group.[3] Its total global sales reached 684,226 cars in 2009 and 85,000 for the month of March 2011.[4]

Škoda Works was established as an arms manufacturer in 1859.

The origins of what became Škoda Auto go back to the early 1890s where, like many long-established car manufacturers, a company started out manufacturing bicycles. It was 1894, and 26-year old Václav Klement, who was a bookseller in Mladá Boleslav, in today's Czech Republic, which was then part of Austria-Hungary, was unable to obtain spare parts to repair his German bicycle. Klement returned his bicycle to the manufacturers, Seidel and Naumann, with a letter, in Czech, asking them to carry out repairs, only to receive a reply, in German, stating: "If you would like an answer to your inquiry, you should try writing in a language we can understand". A disgusted Klement, despite not having technical experience, decided to start a bicycle repair shop, which he and Václav Laurin opened in 1895 in Mladá Boleslav. Before going into business partnership with Klement, Laurin was established as a bicycle manufacturer in the nearby town of Turnov. In 1898, after moving to their newly-built factory, the pair bought a Werner "motorcyclist",[nb 1] which was produced by French manufacturer Werner Brothers. Laurin & Klement's first motorcyclette, powered by an engine mounted on the handlebars driving the front wheels, proved dangerous and unreliable—an early incident on it cost Laurin a front tooth. To design a safer machine with its structure around the engine, the pair wrote to German ignition specialist Robert Bosch for advice on a different electromagnetic system. The pair's new Slavia motorcycle made its debut in 1899.

In 1900, when the company had a workforce of 32, Slavia exports began, with 150 machines shipped to London for the Hewtson firm. Shortly afterwards, the press credited them as makers of the first motorcycle.[5] The first model, Voiturette A, was a success and the company was established both within Austria-Hungary and internationally. By 1905 the firm was manufacturing automobiles.

After World War I the Laurin-Klement company began producing trucks, but in 1924, after running into problems and being hit by a fire, the company sought a partner, and was acquired by Škoda Works, an arms manufacturer which had become a multi-sector concern and the biggest industrial enterprise in Czechoslovakia. Most later production was under the Škoda name. After a decline during the economic depression, Škoda was again successful with models such as the Popular in the late 1930s.

During the World War II Occupation of Czechoslovakia, the Škoda works was turned into part of Hermann Göring Werke serving the German World War II effort.

When, by July 1945, the Mladá Boleslav factory had been reconstructed, production of Škoda's first post-World War II car, the 1101 series began. It was essentially an updated version of the pre-World War II Škoda Popular. In the autumn of 1945, Škoda (along with all large manufacturers) became part of the planned economy, which meant it was separated from the parent Škoda company. In spite of unfavourable political conditions and losing contact with technical development in non-communist countries, Škoda retained a good reputation until the 1960s, producing models such as the Škoda 440 Spartak, 445 Octavia, Felicia and Škoda 1000 MB.

In the late 1980s, Škoda (then named Automobilové závody, národní podnik, Mladá Boleslav or AZNP) was still manufacturing cars that conceptually dated back to the 1960s. Rear engined models such as the Škoda 105/120, Estelle and Rapid sold steadily and performed well against more modern makes in races such as the RAC Rally in the 1970s and 1980s. They won their class in the RAC rally for 17 years running. They were powered by a 130 brake horsepower (97 kW), 1,289 cubic centimetres (78.7 cu in) engine. In spite of its dated image and being the subject of jokes, the Škoda remained a common sight on the roads of UK and Western Europe throughout the 1970s and 80s.

Sport versions of the Estelle and earlier models were produced, using "Rapid" as the version name. Soft-top versions were also available. The Rapid was once described as the 'poor man's Porsche', and had significant sales success in the UK during the 1980s.[7]

"Of course, that the Škoda became such a figure of fun was in part due to its ubiquity on Britain's roads. The company must have been doing something right". extract from BBC report on Škoda sales in 1980s.

In 1987 the Favorit model was introduced, and was one of a triumvirate of compact Western-influenced front wheel drive hatchbacks from the three main Eastern Bloc manufacturers around that time - the others being VAZ's Lada Samara and Zastava's Yugo Sana. The Favorit's appearance was designed by Italian design company Bertone. With some motor technology licensed from western Europe, but still using the Škoda-designed 1289 cc engine, Škoda engineers designed a car comparable to western production. The technological gap was still there, but began closing rapidly. The Favorits were very popular in Czechoslovakia and other Eastern Bloc countries. They also sold fairly well in Western Europe, especially in the UK and Denmark, being regarded as solid and reliable, as well as being good value. Their trim levels continued to improve and they were sold until the introduction of the Felicia in 1994.

The fall of communism with the Velvet Revolution brought great changes to Czechoslovakia, and most industries were subject to privatisation. In the case of Škoda Automobile the state authorities brought in a strong foreign partner. Volkswagen was chosen by the Czech government on December 9, 1990 and, as a result on March 28, 1991 a joint-venture partnership agreement with Volkswagen took place, marked by the transfer of a 30% share to the Volkswagen Group on April 16, 1991. In the following years, Škoda became the fourth brand of the German group, as the Volkswagen Group raised its equity share first on December 19, 1994 to 60.3%, followed on December 11, 1995 to 70% [8] and finally taking 100% ownership of the company on May 30, 2000.[9]

Volkswagen was pitted against French car-maker Renault, which lost because its strategic plan did not include producing high-value models in the Czech factories: it was proposed to manufacture the Renault Twingo city car in the Škoda factories.

At the time the decision was made, privatisation to a major German company was somewhat controversial. The subsequent fortunes of other Eastern-Bloc automobile manufacturers such as Lada-AutoVAZ, and of Škoda works itself, once Škoda Auto's parent company, could be argued to suggest that this was not necessarily a poor decision.

Backed by Volkswagen Group expertise and investments, the design—both style and engineering—has improved greatly. The 1994 model Felicia was effectively a reskin of the Favorit, but quality improvements helped, and in the Czech Republic the car was good value for money and became popular. Volkswagen AG chairman Ferdinand Piëch personally choose Dirk van Braeckel as head of design, and the subsequent Octavia and Fabia models made their way to the demanding European Union markets. They are built on common Volkswagen Group floorpans. The latest Octavia is based on Golf Mk5 floorpan, and Fabia is based on the A0 floorpan, although the Fabia was released a year before Volkswagen released the new Polo based on the floorpan.

The perception of Škoda in Western Europe has changed completely since the takeover by VW,[10] in stark comparison to the reputation of the cars throughout the 1980s—often described as 'the laughing stock' of the automotive world.[11][12][13] As technical development progressed and attractive new models were brought to market, Škoda's image was initially slow to improve. In the UK, a major turnabout was achieved with the ironic "It is a Škoda, honest" campaign, which was started in the early 2000s. In a 2003 advertisement on British television, a new employee on the production line is fitting Škoda badges on the car bonnets. When some attractive looking cars come along he stands back, not fitting the badge, since they look so good they cannot be Škodas.[14] This market campaign worked by confronting Škoda's image problem head-on—a tactic which marketing professionals regard as high risk. Before the advertising campaign, it was common to hear tour guides in Bratislava making jokes about the Škoda, saying "How do you double the value of a Škoda? Fill up the gas tank!" If the Fabia and Octavia had been anything less than excellent cars the campaign might have backfired badly. By 2005 Škoda was selling over 30,000 cars a year in the UK, a market share of over 1%. For the first time in its UK history, a waiting list developed for deliveries by Škoda. Škoda owners in the UK have consistently ranked the brand at or near the top of the J.D. Power customer satisfaction survey during the 2000s.

As of 2010, Škoda has several manufacturing and assembly plants, including one in Sarajevo, Bosnia and Herzegovina. Škoda also has an assembly plant in the city of Aurangabad, in the western Indian state of Maharashtra which was established in 2001 as Škoda India Private Ltd.

In 2006 Škoda presented its brand new model Roomster, which is a small MPV with a unique design, which reflects future trends. At the end of December 2006 Škoda released the first official pictures of the new Fabia, a model that would replace the Fabia in 2007.

Later in 2008 Škoda released the first pictures of the face-lifted Octavia with new headlights, front grille and bumper, as well as a slightly restyled rear and interior. The revised car also features a new selection of engines including the 1.4 TFSI and new common rail diesel engines.

A new concept car was presented at the Paris Auto Show in September 2006. The concept was called Joyster, a three-door compact car intended especially for young people.

Volkswagen Group's Australian arm, Volkswagen Group Australia (VGA), announced that they would be returning Škoda, last sold in Australia in 1983, to the Australian car market in October, 2007. As of 2011, the Octavia and Superb are available in Australia, the Roomster was discontinued due to slow sales. VGA has confirmed the Yeti and Fabia will arrive in July, Skoda also plans to reintroduce the Roomster. [15]

It is rumoured that a version of the low-cost subcompact Brazilian Volkswagen Gol will be a new base model for Škoda in Europe.

A new and redesigned logo was revealed for Skoda in March 2011.

Following a long history of class victories in lower levels of motorsport, Škoda became a participant in the FIA World Rally Championship in the 1999 season, with World Rally Car models of the Škoda Octavia. Škoda's best result with the Octavia WRC was Armin Schwarz's third place at the 2001 Safari Rally. From mid 2003, the Octavia was replaced by the smaller Škoda Fabia. Škoda used the 2004 season to develop the car further, but did not achieve much success the following season. However, at the season-ending Rally Australia, 1995 world champion Colin McRae was running second before retiring. Škoda then withdrew from the series, and the 2006 season saw Škoda represented by the semi-privateer Red Bull Škoda Team. Jan Kopecký drove the Fabia WRC to fifth place at the Rally Catalunya, and as late as the 2007 Rallye Deutschland the Fabia still achieved a fifth place result, again in the hands of Kopecký. Former works Ford and Citroen driver Francois Duval also drove a Fabia WRC in 2006 for the privateer First Motorsport team, achieving a sixth place on Rally Catalunya.

In 2009, Škoda entered the Intercontinental Rally Challenge (IRC) for the first time, using the Fabia S2000, winning three rallies and finishing second in both the drivers and manufacturers championship. In 2010, Škoda's won a total of seven IRC events winning both the manufacturers and driver championship for Juho Hänninen. The car was also raced by privateers in several championships, including Red Bull, Barwa, Rene Georges and Rufa in the 2010 Super 2000 World Rally Championship.

There is also a Skoda Felicia Estate 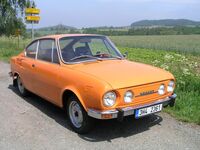 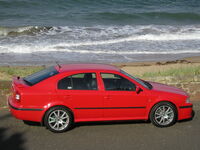